Indigenous Voices: Glimpses into the Fringes of Modern Development

Home/Chiang Mai/Indigenous Voices: Glimpses into the Fringes of Modern Development
Next

Indigenous Voices: Glimpses into the Fringes of Modern Development

*The following is a cross-section preview sample of the entire Indigenous Voices culture preservation project and photo book essay, which includes 300 photographs along with interview(s) material.*

EXPOSURE: Naïve, my life was going to be forever touched by the highland villagers, as they pulled food and medicine from the forest and stood proud of their heritage. I would experience the nuances of village life with its wisps of wood smoke, early morning rooster crows and clucking chickens, and chilly nights as mountain air streamed through the walls of thatched bamboo huts. I would be warmed by open fires and the wholesomeness of family and community, pick tea and corn with them, and scour a mountain stream for fish to eat. We would laugh and take part in ceremonies together. I would also listen to their woes as holidays in the village are followed by a return to the city. I certainly didn’t understand at-first how their lives had been drastically affected by modern development. All I could do was observe from afar and pose questions, and each village experience exposed me to something new.

A Journey into the Mountains of Northern Thailand 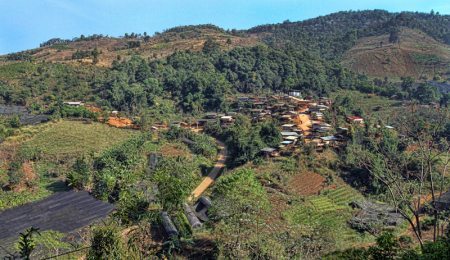 Within a short distance of Thailand’s rapidly developing capital city of the north, Chiang Mai, mountain dwelling ethnic groups, “highlanders,” live in a similar fashion to how our human ancestors once did. They’re more integrated with their natural environment than people living in the cities below them.

However, this is changing as the world market system and lifestyles associated with Western culture perforate the social fabric of the developing world and replace ethnically traditional lifestyles with those of a homogenizing modern world culture.

While the mindsets and related lifestyles of both the older and newer generations can be observed in Northern Thailand, Chiang Mai, for example, with its slow paced and traditionally conservative culture, has evolved dramatically from what I had considered a “big city small town”into a city-like environment, especially with the development of shopping centers, worsening traffic congestion, and increasing environmental pollution. 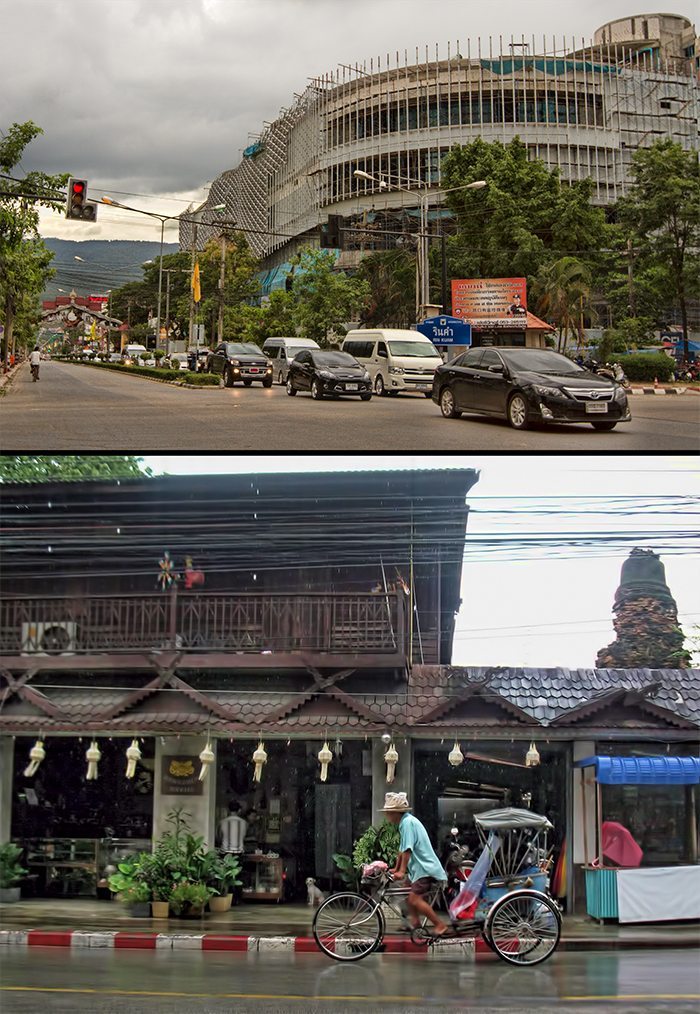 Farmers are selling their generations-old properties as investors purchase and fill in rice paddies with concrete. In this manner, a growing number of Western style businesses and condominium complexes grace Chiang Mai’s mountainous skyline, which is drastically altering the landscape of traditional communities and how people interact with one another. 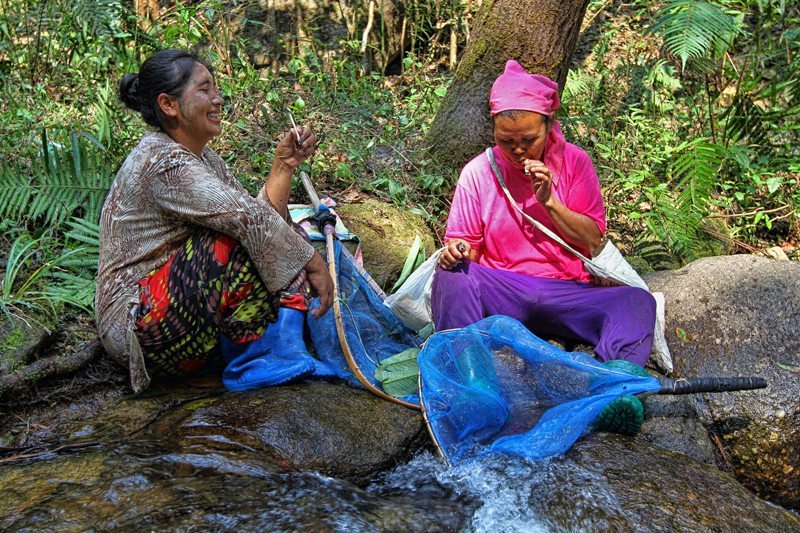 Highlanders who are ethnic migrants indigenous to Thailand’s mountainous areas, many of whom don’t have Thai citizenship necessary for receiving government social benefits, are becoming more part of this trend as they are in a sense being forced to depend on local and world market systems alien to them.

For the most part, villagers can no longer live in their traditional manner. Most now work on their own farms or at hard labor for the Royal Thai Forest Department to generate funds for life necessities as well as the perceived material needs offered by Western style consumerism, such as processed foods and electronics. Many now live and work in the lowlands as well, which creates its own issues both inside and outside the village.

Drunk villagers and meth addicts, a by-product of this brave new world, co-exist with those still attempting to live a quiet life, while community members dressed in traditional clothing mix with younger generations wearing colored hair, T-shirts, and name brand shoes. Overall, the villagers appear to be in shock, desperately trying to maintain their traditions while adapting to the encroachment of a modernized lifestyle that is pulling them in one television program at a time.

For many it’s as though they’re simultaneously living fundamentally different ways of life. In some villages, now both open cooking fires and glowing television sets comprise standard furnishings in bamboo huts where families eat meals still containing food collected from the adjacent forest. Sometimes a baby’s cries meld with the thumping of a karaoke machine, a result of electricity having been recently installed in the village. And shiny new motorbikes are parked next to the satellite dishes pointing towards the sky, plugging villagers into what some of them call “the outside world.”

Many villagers want to keep up with their (modernizing) neighbors but don’t really know how to cope with their rapidly changing culture. The younger generations are looking to the outside world for examples of how to survive in a modern society. The middle-aged villagers want to preserve their culture, for which they feel responsible; however, while their children know the cultural traditions, they’re also being drawn towards the conveniences of an enticing modern world. Most of the elders can’t identify with any of this. Paradoxically, this same modern infringement is bringing to the villagers the basic human rights necessities such as education, modern facilities, and improved health conditions.

“Highland Voices” is a three-year journey that provides glimpses into nine of these highland villages, each at varying degrees of development. This first part of this photo essay-article provides general ‘exposure’ to village life as I at first am attempting to detach myself from a modern world environment and relish real Thailand, which is nature, while acclimating to and learning from a distance about highland village life and how its being effected by outside influences.

After gaining greater insight, villagers from three ethnicities – Karen, Lahu, and Hmong, ranging in age from 14 to 70 years – further open the doors of their homes and help me understand more by using their ‘voices’ to express opinions and related experiences regarding modern development. After being ‘exposed,’ the third section provides opportunity for coming to your own conclusions.

This topic is a global issue. What’s transpiring among these ethnic communities has long since happened in First World countries and continues worldwide. Likewise, Highland Voices isn’t only about these cultures; it’s also about human beings as part of a global community.

Beyond providing a window into the seldom seen world of highland village life, this culture preservation project explores into the effects of economic development on the human species in terms of how it affects relationships among ourselves and with our natural environment. It’s about posing questions, formulating theories, and offering suggestions. We should perhaps take a moment to reflect: ‘What’s happening on Planet Earth regarding the supposed progress of the human species? Let’s take a closer look, at ourselves.’

On the one hand, there remains people living relatively primitive lives, who traditionally respect their elders and eat natural foods, and whose communities are in touch with nature. On the other, a First World, supposedly more advanced social order steeped in social and economic inequality, material acquisition, and environmental pollution among a host of other transgressions. Here we must prioritize; what do we humans really want? And what can we still learn, if anything, from supposedly “less civilized” cultures?

Highland Voices is also a memoir. It’s my analogous journey in a quest to reconnect with my root system, back to a point of natural innocence literally on the opposite side of the planet from my birth. This stems from a driving force to access what I consider to be the heart of humanity, i.e. the nature intrinsic to us all, and which perhaps manifests more in the hearts and lives of these highland people living in their natural environment…