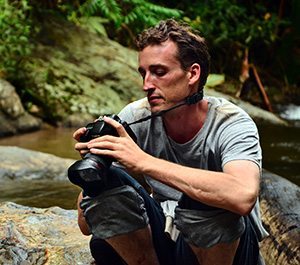 Jeffrey Warner is an award-winning civic journalist — a writer, documentary photographer, and filmmaker.

Jeffrey has for one decade been filling various roles in social research and media. This has included as an employee for television news, newspapers, and magazines. He also as a freelancer has worked for private companies (including as a Reuter’s stringer on Barack Obama’s press pool) and for government and non-government organizations.

Jeffrey’s written and photographic work has been published or exhibited in the United States, in SE-Asia at various venues and academic conferences, and online for entities such as the Royal Photographic Society and for the United Nations.

While Jeffrey has experience in Europe and Bosnia, the last seven-plus years of his life and career have involved living in northern Thailand. There, he has been dedicated to independently focusing chiefly on the societal impacts of economic development phenomena, particularly its impacts on traditional cultures. .

This has included learning from some of the region’s rural marginalized peoples — primarily ethnic indigenous “hilltribe” communities. Jeffrey has worked with Burmese refugees on the Thai-Burma border. He has as well regionally traveled to or worked in Laos, Vietnam, Cambodia, and Myanmar.

Jeffrey has two books that, as a context for studying development impacts, focus on the SE-Asia region. He is now pursuing graduate degree studies in Taiwan.

Jeffrey supports the notion that civic media is perhaps the most powerful human-made force on Planet Earth. Public information likewise becomes most useful when used for creating social capital via going beyond just reporting on events, but rather delving into pertinent issues by empathetically including everyone in the communication process. This can and will ultimately bring benefit to a global society via empowering people through humanitarian means.

He strives toward subjecting himself to cultural environments foreign to those in which he was born, in an attempt to better understand the human condition. His work is propelled by an underlying conviction to locate the heart of human experience. This includes, but is not limited to, seeking the inner voice of people who are ensnared in the extremes of war, poverty, disease, displacement, and social injustice, while providing a window of opportunity for others to peer into their world.

He has a formal education in mass communications, sociology, psychology, and urban planning. His professional background is in the fields of social services, television news production, newspaper, magazine, and other media. Following a spirit-led life vision, Jeffrey received his first taste of international journalism while living and volunteering in Sarajevo, Bosnia. Gaining insight into the long-term socioeconomic effects of armed conflict greatly expanded his worldview. Beyond embarking on additional world travels, including living in Italy, Jeffrey has resided in Chiang Mai, Thailand since 2010. There, he worked as a writer, photographer, and editor for local publications.

Jeffrey began his freelance career in October 2012, and has since taken particular interest in how globalization and related modern development are affecting the lives and traditions of indigenous peoples, whose knowledge he believes remains perhaps the representative core of what it truly means to be human. With this foundation, Jeffrey is now exploring deeper how urban and regional planning can co-exist with and yet maintain natural resources and the integrity of communities’ cultural makeup.

Beyond realizing the madness correlated with an growing, worldwide consumer culture, Jeffrey derives hope from a deep belief that people are inherently good, and that the world does function on light, which is what he aims to illustrate with his work.

Jeffrey’s currently most notable works are the books, Dignity Amidst The Rubbish: Hour-by-Hour With a Burmese Migrant Community in Thailand and Indigenous Voices: Glimpses Into the Margins of Modern Development, and the research project: Pumuen Village: A Template for the “De” of Development